Way of the Spear

I'm freshly returned from my first armored combat event and thinking about the nature of being a Spear.

Some months ago when I undertook a new phase of dedication to the Morrigan, She said this to me: "You are my Spear." This touched off a lot of thinking on my part as to what it means to be a Spear in Her hands. As is my habit with messages from my Gods, I turned to history and source text to try to understand.

The Spear appears earliest in Irish mythology in the hands of the Tuatha Dé Danaan, as written in the Lebor Gabála Eirénn: 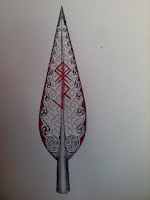 These, Stone, Spear, Sword, and Cauldron, are known as the Four Treasures of the Tuatha Dé Danaan, the old Gods of Ireland. I began to read everything I could find about them. What does it mean to be a Spear? That must tell me something of the work She wants of me. And  if I am a Spear, surely there are other Spear-folk too. And Sword-folk, Cauldron-folk, Stone-folk.

The Stone is the first mentioned, in almost every case where the Treasures are written about. It is the foundation of Sovereignty. Then, we come to the weapons; perhaps arising from the necessity of defending Sovereignty. First the Spear, then the Sword. And after, to feed the hungry company of the warriors, to restore them at the end of the day, comes the Cauldron.

In a battle line (at least, from my beginner's understanding of archaic Celtic weapon use), spears are first out to stop as many adversaries as possible before they come within sword-range. Light spears or javelins are cast through the air (as are arrows; small mechanically assisted spears). Long spears or pikes are thrust before the shield-lines to hold them at bay or impale them as they come. And the warrior's first weapon in the fray might often have been the fighting spear. Thrust and cut with your long weapon first, until it sticks in someone's ribs or too many enemies come in close range; then let go of it and draw your sword.

In ancient times, the common fighter who was not an elite hero and did not possess the wealth of the aristocratic warrior class, might not carry a sword at all. Swords require far greater mastery of metalsmithing to manufacture, and far more expensive high-quality metal, than do spearheads; how many men could be armed with spears from the same metal that would go into the making of a single hero's sword? For this reason, armies were once counted as the number of spears a leader commanded. A man might not be a trained warrior, but hand him a long spear and you can make a soldier of him; he will figure out how to thrust. It is a weapon of instinct. It won't protect him much in a melee, but it weaponizes him. Spears are the expendable resource of an army.

From these readings, and from noting the patterns common to myself and to other Spear folk I've connected with, I make an observation about Spears: Commitment. A spear once cast cannot be called back. Thus, to be a Spear is to be cast toward one's destiny. Fully given and committed, risking all with fierce abandon. Or, as some of my friends have said of me recently; a zealot. I take that criticism as worthy. Caution seems not to be the way of the spear. We are beings of instinct tending to sense the moment and thrust ourselves forward, past the safety of shields, crying victory. We throw ourselves into the destiny we sense before us, in ways that sometimes seem reckless or mad to our friends. Perhaps we are. It is a way of risk.

This all came back to me as I was riding home from the war event yesterday. I'm new to armored combat and had only just finished my armor the day I arrived at the war. Thus, I'd had no chance to practice my fighting skills with my teachers while in full armor before going in to the full fray. Little opportunity to even test my armor under another fighter's blows before facing an army of them. I was, truthfully, not ready for war combat - and the marshal who authorized me knew it, and nearly didn't. But I passed, and in spite of significant nerves about not knowing what to do out there, and being smashed to a pulp by hundreds of men three times my body weight, I threw myself into the combat. Trusting, I suppose, that the urging of my Goddess and the sense of destiny that drew me into the fighting arts were not leading me astray. And they didn't: it was one of the most epic experiences of my life.

I was crushed in shield-walls and knocked to the ground. Hammered by swords, pike thrusts. Took a hard thrust to the faceplate of my helmet that split my chin so I bled all over my armor; paused to get it bandaged, then threw myself right back in. I was fighting with a glaive, a type of long-bladed fighting spear wielded with two hands, which meant I had no shield to protect me, and with my lack of experience, I'm not the best at blocking with the glaive, so I took a lot of hits. I've been told by many fighters I should be starting with sword and shield to save myself bruises... but you see, I'm a Spear, and it's the spear that feels natural in my hands, it's the spear I'm called to fight with. It's the reason I'm there at all. So in I went without a shield, madly, gleefully, fiercely, not minding the pounding and the bruises and the blood. Reveling, glorying in them. Why? Because they were initiatory, overwhelming, ecstatic. Because I am a Spear, and I must immerse myself. Because I am a Spear, and I need the risk and immensity of being thrust wholly, body and soul, into my calling, holding nothing back, pouring myself out on the battlefield.


I am a Spear that cries out for blood
I am the Spear-point that gives battle
(Song of Amergin)
Posted by Morpheus Ravenna at 3:32 PM